Not Exactly a Walk in the Park 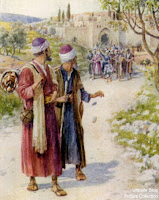 Paul and Barnabas continued on from Perga and reached Antioch in Pisidia.

But what gets lost in that brief sentence is what that journey entailed.  Assuming they travelled by land, it would include:


Oh and this was most likely after the little episode where Paul was lashed 39 times, shipwrecked, and fell deathly ill.

It is remarkable what Paul, Barnabas, and other disciples did so that we could learn the faith, isn't it?

They Were All Thomases 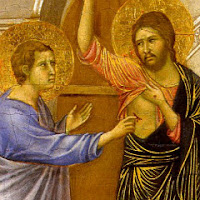 What really stuck with me this week, was that Thomas gets a bad rap.

Nine times out of ten, he is singled out as Doubting Thomas, not grouped with the other Apostles.

And part of that does wonders for our faith.  As Victor so astutely points out in this post, Thomas provided us with even more evidence of Christ's Resurrection.

But the ironic thing - the thing that kept nagging at me all week - was that all of the Apostles were doubting Thomases, were they not?

Jesus told them that He was going to rise on the third day, and they still sat locked in their homes after His death, afraid and confused.  It was not until they saw Him that they believed.

Likewise, when Mary Magdalene tells the Apostles that she saw the risen Lord, Luke tells us they did not believe her.  It was not until John and Peter see the empty tomb that they believed her.

Weren't they just like Thomas?  Did they not need visible proof before they believed?

Don't get me wrong, I don't think we need to add "Doubting" in front of every Apostle's name.  Heck, if that were the case, we'd have to add it to all of ours as well.  But maybe we can add an asterisk or something next to Thomas' to clarify that he wasn't the only one.  Or put air quotes around "doubting" to indicate the irony.

Perhaps I will send a note to our newly elected Pope and see if he will champion this cause for me.

(Yes, I know what you are thinking.  You'll believe it when you see it...)


Blessed are those who have not seen but believe.