Jesus Saw in Black and White

Today we read about Jesus' first prediction of His Passion.

The part that always strikes me about this reading is the clarity in which our Lord saw things.

Peter had just told Jesus that He was the Messiah.  To anyone around, this probably looked like a friend acknowledging a Friend.  Or a disciple reiterating what His Master hinted at.  But Jesus, who saw things for what they truly were, saw God working through Peter.  And speaking to Him through Peter.

Fast forward a short period of time, and we see Jesus rebuking Peter because He saw Satan working through him.  Again, anyone around who saw Peter upset that his Lord would have to suffer would have probably seen this as a friend offering support to his Friend. Or a pupil wanting to protect his Teacher.

I know that is how I would have seen it.  (And often times, still do when I read this passage!)

But that would have been the clouded, human view of things.

Luckily, Jesus did not suffer from those vision problems.

Instead of seeing His friend in both scenarios, He saw His Father and Satan.  Good and Evil.  Black and White.

I wonder what the world would look like to us if we had that clarity? 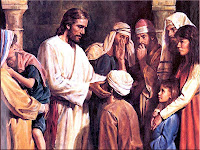 And immediately the man's ears were opened.

Having heard this passage many times,  I am guilty of sometimes taking it for granted.

Instead of thinking about what  it must have actually been like, I lump it into all the miracles that I will never fully appreciate.

And when Mark continues writing about our Savior, I usually follow right along with him, leaving that former-deaf man in the annals of biblical history.

But a few days ago, on the show 20/20, they played a video of a woman fully hearing for the first time.   (you can see it here)

She was pretty much in tears from the second they turned her hearing device on, and I realized all the emotion that goes along with the words "his ears were opened".

Now I envision that man having the same mix of speechlessness and tears when Jesus healed him.

The world as he experienced it - on many levels - would never be the same again.  His life changed forever.

And thanks to a timely TV show, that for some reason I watched when I usually don't, so did my appreciation for one of our Lord's miracles. 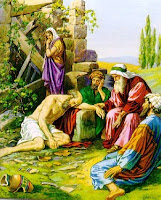 I was listening to the Daily Audio Bible the other day, and Brian was reading from the Book of Job.

There was a line from Elihu's second speech that really hit home.

Just because you refuse to live on God's terms,
do you think He should start living on yours?

Let's be honest, we all have bouts in our life where we stubbornly plead for God to do things our way.  But Elihu reminds us that we are here - and we were created - to follow God's plan. Not the reverse.

Now, interestingly enough, I didn't remember coming across this line before.  I wondered if it was because Brian had been reading from the Message version of the Bible.

So I checked the Douay-Rheims version and it offered this translation for the same line:

Doth God require it of me, because it hath displeases thee.

And the King James version offered this one:

Should He repay it according to your terms,
Just because you disavow it?

Neither is quite as straightforward as the Message version, in my opinion, so perhaps that is why I missed it the first umpteen times I read it.

Is this translation pure to the original intent?  I don't know.  Far smarter minds than mine can weigh in on that.

But there is no disputing the message itself is spot on.