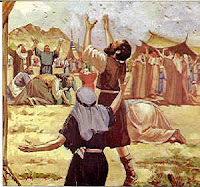 I learned two things I thought were pretty interesting this week, and both pertained to the Old Testament.

The first has to do with today's first reading.  Manna from heaven.

Some scholars believe they know where that manna came from. Without taking away from the divine part, they believe it could have been from the Tamarisk trees that grow in the Sinai.

Walking the Bible author Bruce Feiler tells us that "plant lice suck on the sap of those trees, and excrete white resinous globules onto the branches."  He goes on to say that the sweet globules crystallize in the sun, fall to the ground, and if not harvested quickly, can dry up and disappear or get blow away in the wind.

Despite the fact that he tells us this manna tastes like honey, lice excretion doesn't sound super appealing to me!  But I guess if I was stranded in the desert ....

The second has to do with the term Yahweh.

Did you know that we aren't 100% sure that Yahweh is Yahweh?

The only letters we have are YHWH - we do not have the vowels.  Therefore, we aren't 100% how it is pronounced!

In fact, there are many scholars today that think the correct word is more like Yehowah, not Yahweh.

Hope you are having a blessed week.

God so loved the world that he gave his only son,
so that everyone that believes in Him might not perish
but might have eternal life.

There is nothing more to write really.

There is no better example for fathers ... or humans ... than that.

And Happy Father's Day to all you Fathers, Grandfathers, and Godfathers out there.

I read an article this week that stated Americans waste anywhere from $2 Billion to $5 Billion each year in gift cards.  They get them, and then lose them or never use them.

My first reaction was to scoff at the foolish folks that miss out on getting "free" stuff.  "It's like throwing money away," I said aloud as I read the article.

But halfway though, I remembered the Macy's gift card I had sitting around since last year.

And the Best Buy gift card I got for Christmas.

I got up and nervously looked around for them - hoping to find both so I didn't become part of the dreaded statistic.

Fear not, friends.  I found them.

Along with cards for Sears, Barnes and Noble, and Kohl's.

"Technically, I haven't wasted these yet, since they are still valid," I said, trying to convince myself I wasn't part of the group I had just looked down on.

Our priest echoed today's readings in his homily, reminding us of the gifts given to us by God, and strengthened by the Holy Spirit.

"I guess I better start looking for those," I thought, "before I let those go to waste as well ...."


A Blessed Pentecost to all of you.  God Bless.

I've been a bit remiss in fulfilling my meme duties over the past few weeks.

Victor tagged me during Lent to share 5 things I love about Jesus.

And Karinann passed on a meme where I have to choose my three favorite Scripture verses.

I think most of you that read this blog also read theirs, so I don't need to gush on about how wonderful both of them are.  But if you need me to just let me know ...

In any case, two memes are one too many for my simple mind to work on - so I'm going to break some rules and combine them.

(sound of blogosphere gasping in unison)

I know, I know.  But here it goes.  I'm going to find my three favorite verses that show why I love Jesus.

I love Jesus not only because He showed great humility by performing this act, but because He did it to teach us.  Equally powerful, though, was when He did it.  On the night he was about to be handed over to death, He loved us enough to keep teaching.  How did He keep such focus?  Such a caring frame of mind?  It is beyond my comprehension - but certainly not taken for granted.

Number 2:   John 21:15-17
Jesus asks Peter if he loves Him three times.
We've all been guilty of doing or saying the wrong thing.  Remember how badly you wanted a do-over?  I can't imagine the guilt poor Peter must have been living with after denying our Lord three times.  Jesus lets him redeem himself in one of the most beautiful gestures in the entire Gospel.

I love Him for showing me that same forgiveness.

To this you were called, because Christ suffered for you, leaving you an example, that you should follow in his steps.   “He committed no sin,
and no deceit was found in his mouth.”  When they hurled their insults at him, he did not retaliate; when he suffered, he made no threats. Instead, he entrusted himself to him who judges justly. “He himself bore our sins” in his body on the cross, so that we might die to sins and live for righteousness; “by his wounds you have been healed.”

A perfect summary of the sacrifice Christ made for us.   It captures His innocence, His obedience, and His love.

And, of course, it reminds me of the most important reason I love Jesus.

Thanks again to Victor and Karinann.