Jesus and the Dog? 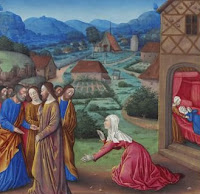 Bible passages usually bring out two separate sides of me.

The first is that of a Catholic looking for the religious lesson buried (sometimes not so deep) within the stories and parables. The second is that of a curious “historian” who loves to think about what actually happened.

At that time, Jesus withdrew to the region of Tyre and Sidon.
And behold, a Canaanite woman of that district came and called out,
“Have pity on me, Lord, Son of David!
My daughter is tormented by a demon.”

But Jesus did not say a word in answer to her.
Jesus’ disciples came and asked him,
“Send her away, for she keeps calling out after us.”

He said in reply,
“I was sent only to the lost sheep of the house of Israel.”
But the woman came and did Jesus homage, saying, “Lord, help me.”

He said in reply,
“It is not right to take the food of the children
and throw it to the dogs.”

She said, “Please, Lord, for even the dogs eat the scraps
that fall from the table of their masters.”

Then Jesus said to her in reply,
“O woman, great is your faith!
Let it be done for you as you wish.”

And the woman’s daughter was healed from that hour.

The religious lesson in here is pretty straightforward. Our faith in Jesus will save us. And that faith should be as persistent as the Canaanite woman’s was.

But boy would the “historian” side of me sure like to know what was really said and why. After all, read literally, Jesus is calling this woman or her daughter a dog. (I think the actual translation can range from puppy to dog … but still, its not that flattering!) And this is after ignoring her!

So was Jesus really ignoring her? Did he really mean what he said - that he was only there to save the sheep Israel? Did he really think of the gentiles as “dogs”?

Perhaps Jesus had a full day at that point. Maybe he was tired of the hundreds of people that surely clamored around him every day asking him to heal them. Its not unthinkable right?

Or maybe the witnesses misread Jesus. After all, the disciples ask Jesus to send her away so perhaps they misplaced their own feelings on Jesus?

While both scenarios are certainly possible, I like to believe Jesus was simply teaching his apostles a lesson while testing the faith of this woman. After all, its hard to tell the tone that something was said when all we have is the written word. (Kind of reminds me of the problems we run into today with email being misunderstood or taken the wrong way) Maybe Jesus was not mocking the woman when he uttered those words … perhaps he was mocking society at the time. You know, with a sarcastic tone. Or perhaps he said them with a straight face to see how much faith this woman really had.

In any case, the real lesson is clear and that is all that is important. Jesus will reward our faith in him.

But I would sure like to have been the proverbial fly on the wall!