Enough is Enough (A Soapbox Rant) 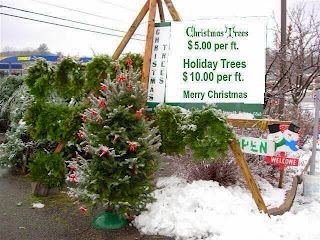 (steps up on soapbox)

Perhaps I've been living under a rock these past few years, but the other day was the first time I ever heard the words Holiday Tree.

Listen, I completely understand our culture's habit of wishing people a Happy Holiday.  Even though I celebrate Christmas, and want to remind folks the real reason for the season, I get why people may not want to assume others share the same views. So they default to the now politically correct Happy Holiday.  I get it.

But reaching into Christmas tradition and removing the word it is based on is not only insane, but ignorant as well.  And I know trees have nothing to do with the religious part of Christmas - but a line has been breached and there is no telling where it will stop.

What is next?  Nativity scenes will be replaced by a nondescript brick building and labeled Holiday scenes?

Ok, ok.  Maybe I am overreacting just a bit.  But each year it feels like Christmas becomes less and less about Christ and more and more about everything else.  In fact, sometimes I wonder if people would even remember Him if they didn't have to mention His name every time they said Christ-mas.

Maybe that is why the Holiday Tree thing bothers me so much.

Anyway, to be fair each of us is free to act and worship as we choose.  That was God's second greatest gift to us.

But hopefully you won't blame me if I tell the world enough is enough.  It is time to stop diluting our holiday Holy Day.

Amen! I haven't heard the "holiday tree" phrase, but I do agree we as a culture are on a very slippery slope. My latest rant(not published :) ) was when I turned on the news, something I rarely do, to see the controversy over the Atheists new billboard that proclaimed: No one needs Christ in Christmas...
Well, I don't know about them, but I sure need Him there and everywhere else in my life for that matter.
Wishing you a Merry and blessed Christmas!

Sadly the political correctness is over here too. Some Local Authorities, schools and other official organisations are banning the word Christmas (so as not to offend the non-believers).

Some schools have stopped Nativity Plays. God is not welcome in our schools. At work, or even in some families.

The very belief in an "old man floating on a cloud" somewhere above is mocked on TV and the media often. To believe in Him is portrayed by opinion formers as old-fashioned, quaint or down-right stupid. Some even encourage others openly NOT to believe.

I'll get off the soap box now.

God bless you and have a Blessed Christmas.